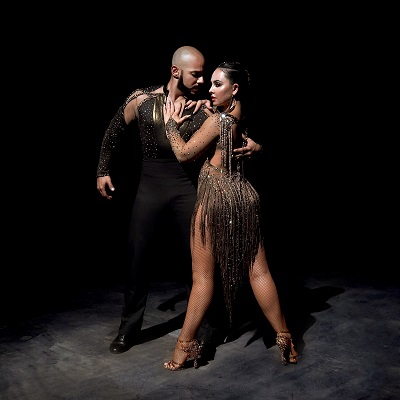 Karel Flores was born and raised in Mexico City Mexico into a family or artists.  From very young, Karel was exposed to both acting and dancing, from forming part of every dance group in school to taking up on main roles in Mexican soap operas.

Throughout the years, she took up on acting, jazz, Hawaiian dancing and cheerleading but these were only extracurricular activities and she never imagined actually making a career out of dance nor acting. However, not until her late years in high school that she discovered the dance that would change her life, salsa.  Being an overachiever, Karel moved cities to be able to train with the best dance co. In Mexico “salsa con clave” directed by the world-known Víctor and Gaby. However her hunger to learn didn’t stop there.
After about 6 months, she decided to go to NYC for only a few months to try to learn as much as she could. However, those few months turned in to now 8 years, when during her stay she was invited to join her dream dance company, Yamuleé.

Training directly under Osmar’s direction she was able to constantly alternate with his permanent dance partner. Not long after an opportunity arose when Osmar’s former partner decided to take a break from dance. With not a moment of hesitation, Karel embraced the opportunity and shortly after, she became Osmar Perrones’ official dancer parter.

Years of training and hard work has allowed Karel to become a world wide known top dancer and instructor. With Yamulee dance co., As the director’s former partner and female lead dancer, and now as a solo artist, instructor and choreographer, Karel has traveled and conquered hearts and stages from North to South America, Europe and Asia.